Barley Bride all in White (or, “Flavor for Fatigue”) 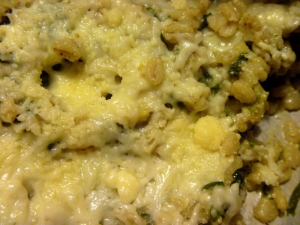 So I’ve hit my head pretty hard at least five times this week from my own dysmetric clumsiness, the piece de resistance having happened last night with a hammock. Were video to have been taken, I would be wildly viral right now; instead I have to be the person who nobody witnessed being flipped upside down like a bad carnival ride. This morning the headache remained, along with blurry vision most likely due to a little trauma to my occipital lobe… but other than that I meet no criteria for a true concussion. Regardless, still gotta eat, right?

This will be a nice single-dish meal for the confused and lethargic amongst us. The barley experiment from a day or two ago was both the flavor and ease inspiration. Start the event with mincing your garlic and onion as finely as possible and throw them in an oiled pot warming to M; once it reaches full temp reduce to ML and let simmer. Mix water with turmeric and 1.75 tbsp of Greek seasoning, mix in uncooked barley and bring to a boil. Cover, reduce heat to L and walk away for 15m. In that little window, mince spinach and basil as finely as possible and add to the oil when onions look translucent. Mix well and let that simmer for another 15m. When the barley is a moment from completion, take from heat and add ricotta cheese. Stir until a creamy sauce tenderly holds each pearl of barley. Top with mozzerella and Parmesan, then cover the pot and return it to your off burner until the cheeses melt. 4 spoons!