Thaw then marry your marinara and sausage in a medium-sized pot on the stove. Also start a large, oiled pot of water with an accompanying dash of salt. When your water begins to show signs of a boil, hold each leaf of kale by its stem and dip into the water for a count of 12. Wrap them in a clean towel and gently squeeze out all the water. Move them to the cutting board, remove stems and mince; set aside. Your pasta can go in now and cook until it’s a little too al dente to be al dente, then drain it and rinse with cold water until everything is chilled to room temperature.

Shred asiago cheese, set aside with mozzarella. Mix egg with ricotta cheese and dash salt. Rub a little olive oil inside a 6×6″ baking pan and begin layering by laying the most whole of your noodles along the bottom of the pan. Pour on 1/4 your sauce, scatter in half your kale bits, sprinkle 1/3 the asiago on, drop in dollops of ricotta and spread gently across the breadth of the pan, then add as complete a layer as you can with the noodle amputations and do this all again. Add a final layer of noodles, then add the rest of your sauce and top with the rest of your asiago and all of your mozzarella and Parmesan. Bake foil-covered pan in 350° oven for 45m, then take foil off and cook another 10-20m until optimum browning has occurred. Though next time I’d use more kale and sausage, this was still pretty good and worth all 4 spoons!

Broccoli Casserole-ish (or, “Well, There’s Only Everything Good in It”)

I’m going to have to tell you all something.

I’m not proud, and hope to use this public forum to ensure I bear the full responsibility for having held such a simple secret for so long.

…I’ve never made a broccoli casserole.

There. You got it out of me. Proud?

Anyway, please suffer through this, my first time, as an experiment in both flavor and safety. Mince the garlic and onion and saute on ML in butter until onions become translucent. While that’s going on, cut florets to a medium-small proportion, set aside. Beat the egg into the can of cream of mushroom soup. Melt the cream cheese into the butter/onions/garlic, remove from heat and fold everything together. In large bowl, combine the contents of that pan and the egg-soup mixture. Shake in a smidge of salt and mix well. Toss your florets with this goop, put in a baking pan then top with cheddar cheese and panko. Bake in a 350° oven for 20-30m. What comes out will work well either as a stand-alone side or as a slightly saucy accessory to penne pasta; I didn’t know exactly what to expect, and I will strive in the future to perfect this concoction’s consistency. As it stands, though, this was really, really tasty and earns 4 spoons. 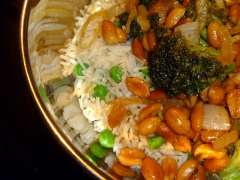 Broccoli is delicious and I wish I had not overcooked it — that, of course, is really my largest complaint of last night’s dinner, and one which only you can avoid in the future (or me, but lets not play a game of semantics here). It’s easy as sin to cook onion slices to near-sheer on ML then to add peanuts. Take the pan from the burner and let the nuts toast for a few minutes. While that sits, get another pan and start the broccoli cooking on MH. When it turns a full, bright green go ahead and add the peanut/onion mixture. Stir together all the other ingredients  (starting from blackberry preserves –> down) and toss your nuts. And the broccoli. And bring it to a low boil on M for the corn starch to thicken things up a little. In the pan from whence the onion/nut mixture came, there should be an oily enough residue to start the rice.

Scramble your egg and set aside. Add frozen peas and rice to hot pan , toss. Add the egg back in, squirt in some soy sauce and continue tossing until the rice is hot. Serve everything together and call it a night of order-in. 4 spoons! 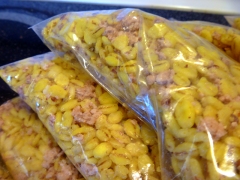 Oh, and I’ve been making that dog food for a while now. It was referred to once as “Chinese Food” from its appearance in refrigerated clear Tupperware; the dogs love it, I love what it doesn’t have in it, but I don’t love how quickly it spoils. I’ve prepared in advance the meat/barley mixture to freeze and have ready on those days I feel tired enough to buy another can of rendered, rotten meat. Rice is something we usually keep on hand cooked so I can usually add it later, but that can obviously be mixed in and frozen with this mess.

Mix the turmeric and cinnamon into the boiling water when you cook the barley, salt the turkey while it’s cooking. When both have cooked to completion and cooled enough to combine, add the flax and olive oil along with some cooked brown rice. I did forget to add a little bit of mixed vegetables to this batch… but that it won’t faze the animals. Freeze whatever you can’t use in 3 days.

Boil your soaked beans for thirty to forty-five minutes. While that’s going on, chop onion into large chunks and throw into food processor; blend until paste-like. Then unload the dishwasher or something. Be patient, the beans will thank your digestive system later. Once soft enough to chew without making a face, drain the matpe and add it to the food processor. 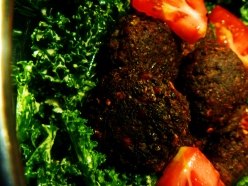 Not burned, just made of black beans and shadows.

Add the spice mix, sesame oil and asafoetida and let it process itself for a minute or two. It should be a nice paste-like consistency. Put it in the fridge while you do this next here thing:

Wash your kale and begin stripping the veins. Tear or cut leaves into bite-size pieces and put in a large bowl. Mix Lemonaise™ with oil and vinegar then massage dressing into kale. Let sit for 15 minutes while you get back to this:

Take food processor bowl out of fridge and begin making nuggets. Your oil should be warming in a deep sauce pan on M-MH, for when it reaches sizzle-upon-tossed-droplet-of-water status, it is time to fry your balls. Flatten each ball slightly as you put it in the pan; after about 60 seconds, flip one to see its color. Once a satisfactory dark amber brown is reached on both sides, remove them from the pan onto a paper towel for a couple minutes of draining.

Arrange kale and sliced tomato on two plates, sprinkling each dish with 1/2 tsp salt and 1/2 tsp pepper. Top with your fried, protein-and-fiber-rich goodness. It will be spicy, and in fact was spicier than I anticipated. But in a good way. And I am proud that, egg notwithstanding for some, this is an entirely vegetarian meal. I am dutifully trying to add more kale into the culinary repertoire; right now I am trying to follow The Wahls Diet as closely as finances allow, and kale is an easy sell both for its price and nutritional value.

Now I am going to go collect that poster-child paycheck from the Kale Commission. ‘Night!

Return of the Salty Fucksticks

Knead your butter into the flour until crumbly, then press into the bottom of a 13×9 baking dish. In a large bowl, throw your fuckstick-mix in with a beaten egg and condensed milk. Toss to mix. Pour over dough, then sprinkle liberally with dark chocolate chips. Put in a 350° oven for twenty minutes. Remove and spread the melted chocolate chips atop. Let sit until cool. Devour.

I still have 1/3 of a gallon of this toffee after making these for, and giving some loose toffee away to family. It’ll be shrug-and-freeze time soon.

First thing’s first — get a large bowl. In it, combine 1.5c of your beans (put the rest in the fridge for the not-too-distant future) and the following: egg, croutons, bread crumbs, salt, asafoetida and to taste: all above listed seasonings. Put the bowl contents into a food processor and pulse until the consistency-ish of what a ground beef meatball mixture.

It’ll be a little slimier in texture than that, for forewarning’s sake. But it will do the same thing as meatball mixture — make little balls! I made six, but feel free to experiment with ball size.  Heat oil until it’s at full M then add the balls. Press them a bit flat with a spatula. Let them cook until light-medium brown. Imagine Michael Jackson circa 1974; that color. Then flip them and do a double Jacko.

Remove them and put them into a covered dish (I put them on paper towels too). Put them in at 350° for 10m. While they’re in, mix the spices you put in the pattymush into your leftover fast food dressing packets (ultimately, this was about 2tbsp’s worth) and plate the rice. Remove the cakes. Arrange them artfully atop the rice, then also artfully top with sprouts, feta and a fork-drizzle of dressing.

Look here at how pretty this photo just prior to plating is. 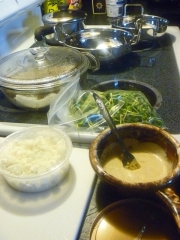 And see, now, what had happened was while I meticulously photographed this process from the beginning, we immediately dove into the plated results: food lust drove me from the camera and into the dish. I guess that means it was good?

I checked with my dinner companion. Her verdict: “I wouldn’t change a thing, except for maybe making them a little more moist.” And, dear readers, fear not: I had already edited this recipe before posting to exclude half the original amount of breadcrumbs used and adjusted the oven time. Watch those two aspects to ensure a moister texture!